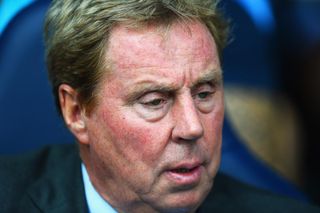 Former Spurs boss Redknapp endured a miserable return to White Hart Lane, as a brace from Nacer Chadli and a goal apiece from Eric Dier and Emmanuel Adebayor condemned his side to a crushing defeat.

It was QPR's second Premier League defeat in as many games this season following last weekend's 1-0 home reverse at the hands of Hull City.

Redknapp has utilised 3-5-2 because it allows him to play two strikers without compromising numbers in midfielder, and the 67-year-old felt Sunday's defeat was a result of sluggishness amongst his players, rather than any issue with the formation.

"I don't know if that [the system] is the problem, we played okay last week playing that way," he said.

"It was about energy, we didn't play with enough energy and we looked off the pace a bit.

"In certain areas we weren't sharp enough, we've got to work harder than that with and without the ball. Maybe one or two looked a bit slow.

"I don't think it's systems, that system allows me to get two strikers in the team, which I was trying to do.

"[Loic] Remy doesn't play up on his own, Charlie Austin doesn't either really - it's difficult so you're looking to get two up front.

"You [can] play 4-4-2 but you get slaughtered in midfield, it's very difficult.

"I thought it would suit us fine. I felt Rio [Ferdinand] and [Steven] Caulker did okay today, I thought they coped but in front of them we were short of energy and didn't really get a grip of the game at all."