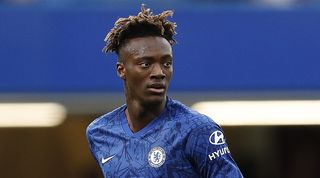 Tammy Abraham has refused to rule out a switch of international allegiance from England to Nigeria.

The Chelsea striker has enjoyed a superb start to the season, scoring seven goals in five Premier League appearances - including a hat-trick in Saturday's 5-2 victory over Wolves.

Abraham won two England caps in friendlies against Germany and Brazil in 2017, but he has not played a competitive game for the country of his birth.

And after being omitted from Gareth Southgate's most recent senior squad to face Bulgaria and Kosovo, the centre-forward has hinted that he may still choose to represent Nigeria, who he qualifies for through his father.

"Yes, I have heard the talk [about a potential switch]. I've not really been focused on that yet," Abraham said.

"I think when the time comes, the times comes. It's about focusing on Chelsea and hopefully scoring goals and getting victories.

"We never know. You can never say never; whatever comes first really. I just have to keep full focus on Chelsea."

Frank Lampard's side welcome Valencia to Stamford Bridge for their first Champions League game of the season on Tuesday.