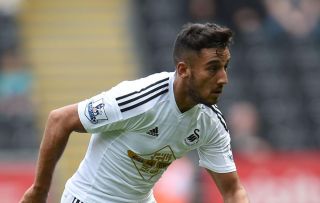 Swansea got their season off to an ideal start last weekend, winning 2-1 at Old Trafford in Louis van Gaal's first match in charge at Manchester United.

However, it is the team's home form that Taylor feels needs addressing, with Swansea winning just six league matches on their own turf last season.

With promoted Burnley visiting the Liberty Stadium on Saturday, Taylor hopes Swansea can get their off to a successful start in front of their own fans.

"A big part of this season is about making the Liberty a fortress again," he told the club's official website.

"Last season - at home - just wasn't good enough by our standards. We have spoken as a team about doing a lot better in front of our own fans, because we didn't give them enough to celebrate at the Liberty last season.

"So it's important that we put on a really good performance and secure three points for them, particularly as we under-performed badly against Villarreal in the home friendly before the season kicked off.

"As a group we are really looking forward to playing in front of a packed Liberty again, and hopefully there will be lots to celebrate come Saturday evening."