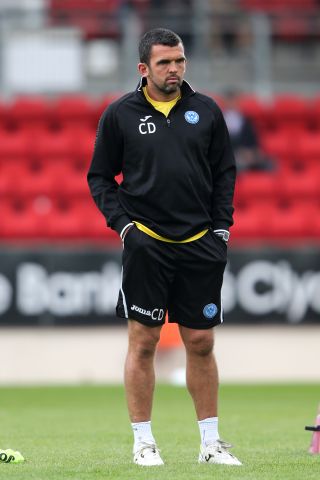 St Johnstone manager Callum Davidson felt the tempo of their Tayside derby draw was unaffected by the absence of fans.

There was no shortage of intensity as Saints drew 1-1 with Dundee United at Tannadice in their opening match of the Scottish Premiership campaign.

The first half was frantic at times, with Michael O’Halloran over-competitive as he committed a series of fouls that led to his 45th-minute red card.

Nicky Clark gave United the lead from the spot in the sixth minute, but Liam Craig levelled for the 10 men in the 55th.

For those fortunate enough to be at Tannadice, the silence of the stands allowed the shouts of the players and the clatter of the challenges to be heard and accentuate the physicality of the contest.

And Davidson claimed he even forgot there were no fans in the ground at times.

“I was that caught up in the game I probably didn’t realise,” he said after his first game as a manager.

“It felt like a competitive game to me. Maybe because I was right in the middle of it.

“Did I enjoy it? Of course I did. After the first half I thought ‘this is a tough baptism of fire’.

“But the players played at a tempo and attitude that you wouldn’t realise there wasn’t a crowd.”

Craig did miss the supporters, though, especially when his fierce volley struck the back of the net.

“It’s great to be back,” he said. “It’s disappointing we didn’t have fans here because I’m sure we would have had 1,500-2,000 and Dundee United would have had a big crowd.

“And when you score goals, when there’s no fans here it’s not going to be the same because the whole atmosphere is what makes the goal a very good goal, the noise and everything that goes with it. I didn’t know what to do because it’s been that long since I scored anyway, never mind with no fans.

“That’s disappointing, but I’m sure the supporters will be happy with a lot of aspects they saw and the sooner we can get them back in safely the better because players love playing under that pressure as well.”

Lawrence Shankland missed a good chance to add to his 28 United goals when he shot over early in the second half after showing great skill to work space, but he soon passed up another two openings when he lost the ball after taking a series of touches.

But United boss Micky Mellon is not concerned about the striker adjusting to the top flight.

“They are all learning lessons all the time,” Mellon said. “They are playing at a different level now.

“He is probably one I am not worried about, in terms of finishing and scoring goals. His record and the way he is will tell you that. He will score goals.

“So I would be less worried about him, I’ve got no problem with him.