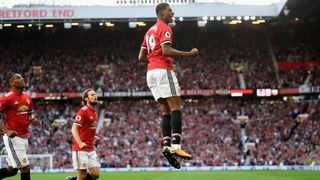 Manchester United forward Marcus Rashford turned 20 on Tuesday as an established and key part of the first team at Old Trafford.

Rashford broken into the squad in spectacular fashion under Louis van Gaal, scoring four goals in his first two games against Midtjylland and Arsenal.

He has become a common fixture in the United starting XI, with Rashford now a favourite of Van Gaal’s successor Jose Mourinho, who has used him in all 10 of United’s Premier League games this season having played him 32 times in the league last term.

Here, with the help of Opta data, we assess the teenage years of one of English football’s brightest young stars.

13 – Rashford has 13 Premier League goals to his name as a teenager. This is more than Manchester United great Ryan Giggs (12) but well adrift of Michael Owen, who leads that category with 40 ahead of Robbie Fowler (35) and Wayne Rooney (30).

52 – United’s all-time leading goalscorer Rooney has played the most games in the Premier League as a teenager with 105. Rashford, by comparison, has played 53, two more than former United forward and Real Madrid superstar Cristiano Ronaldo.

19 – With 13 goals and six assists, Rashford has been involved in 19 Premier League goals as a teenager, just two shy of Giggs. Owen again leads the way with 55 goal involvements.

15 – Rooney’s tally of United Premier League goals as a teenager, that puts him two clear of Rashford in second, with Giggs third and Ronaldo (eight) fourth.

13 - Only Wayne Rooney (15) has scored more Premier League goals as a teenager for than Marcus Rashford. Prodigy.October 21, 2017

56 – The amount of Premier League games Giggs appeared in for United as a teenager. He tops the list ahead of Rashford and Ronaldo (51).

42 – With 42 appearances under Mourinho, Rashford is by far the teenager the Portuguese coach has used the most in the Premier League. John Obi Mikel (17) is the only other player in double figures in that regard. Ruben Loftus-Cheek is third (six).

50 – United have used 50 different teenage players in the Premier League. Only Arsenal (53) have used more.

16 – A total of 16 different teenagers have scored for United in the Premier League. Arsenal and Everton lead the way with 17 different goalscorers under the age of 20.

4 – Rashford is one of just four teenagers to have scored twice on their Premier League debut. Robbie Keane, Kevin Nolan and James Wilson join him in that select club.

18 years, 119 days – By scoring twice and providing an assist against Arsenal, Rashford became the youngest player to be involved in three goals on Premier League debut. Sergio Aguero achieved the feat at 23 years, 73 days. Michu, Fabrizio Ravanelli and Allen Boksic were also involved in three goals on debut, with Mladen Petric (31 years, 229 days), the oldest to do so.