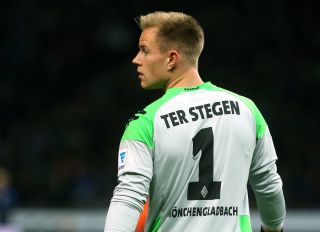 With Victor Valdes set to depart Camp Nou at the end of the season, the 21-year-old is the latest to be touted as a possible replacement.

But the Germany international, who has only kept two clean sheets in his side's opening 10 Bundesliga fixtures this season, insists his head has not been turned.

"I don't know, right now I'm focused on Borussia, which is the most important thing for me," he told Catalan newspaper Sport.

"I owe this club, which I've followed since I was little and this now is the main thing.

"It's nice to hear that interest exists, but that's all I can say at the minute. I'm happy to be in Monchengladbach and we'll see what happens.

"What has to happen will happen. I'm preparing every day to be the best goalkeeper I can and try to take it day by day."

And Ter Stegen is quick to acknowledge that, if he were to head to Barcelona, he would be filling the gloves of one of the world's greatest.

"Victor is one of the best keepers in the world," he continued. "He's done a great job at Barca for many years.