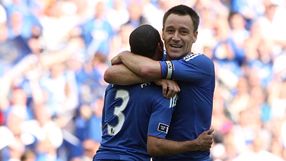 Terry has been nursing a rib injury while Cole missed Chelsea's last two games with an ankle problem.

With regular right-back Branislav Ivanovic suspended for the clash against Tottenham, the availability of the experienced Terry and Cole is a major boost for the Di Matteo who faces three crucial games in eight days.

"It's a good time to have him back. John Terry came through training fine too."

Midfielder Oriol Romeu is ruled out through illness.

Chelsea face a pivotal period in their season with the Wembley clash against Tottenham on Sunday being followed by the first leg of their Champions League semi-final at home to Barcelona on Wednesday.

The Blues then face third-placed Arsenal in the Premier League next Saturday as they try and stay in the hunt for a top-four finish in the league.

Despite Barcelona looming on the horizon, Di Matteo's sole focus is on Tottenham as Chelsea try and regain the FA Cup they won for the sixth time in 2009/10 by beating Portsmouth who surprisingly beat Spurs in the semi-final.

"The two times we played [Tottenham] in the league, the games were quite balanced," Di Matteo said. "But in a one-off game it is difficult to say who is the favourite due to the form, because the dynamic is a little different.

"We are in good form and the players are confident. At the moment I am only looking at the game on Sunday, and thinking about what is the best selection to win that game.

"Every time you play at Wembley it should be a spectacle because it is a great arena."

"We have two opportunities to win a trophy and we will try to win them both," added the Italian, who took over from Andre Villas-Boas last month.

"That is what we are working for, that is challenge we face and we are looking forward to that challenge."