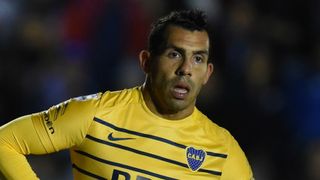 Argentina striker Carlos Tevez has suggested he could quit football by the end of the year.

Tevez, 32, currently plays for Boca Juniors in his homeland, having previously enjoyed success with Manchester United, Manchester City and Juventus in Europe.

But he has voiced frustration at a number of aspects of the domestic game in Argentina, including the pressure placed on Boca by external factors such as the media, who he blamed for a three-match ban picked up earlier this month for dissent.

"The penalty was given to me by journalists and not the committee," he told Fox Sports. "They pushed to give me three matches."

He continued: "If we draw, Boca are in crisis - River [Plate] not so much. They [River] tie and play well, everything is nice.

"I enjoy football but not everything that surrounds it."

Tevez also criticised the short-term nature of fixture planning, adding: "In Europe you know what date you will play each team for the first six months.

"Here, you find out on Monday if you play on Friday.

"There is a possibility I could quit at the end of the year. I'm thinking about it."

Tevez has won 76 caps for his country.