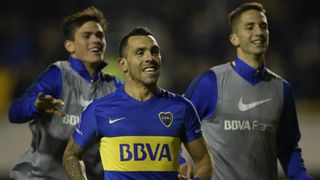 Boca Juniors striker Carlos Tevez insists he wants to retire at the club and will not leave to return to European football.

The 32-year-old was reportedly close to joining Corinthians this month, although the clubs denied that any negotiations had taken place.

Tevez had also been linked with a return to the Premier League, with former club West Ham and Chelsea rumoured to be interested, despite having only returning to Boca from Juventus a year ago.

But the Argentina international has broken his silence on his future, saying he wants to end his playing career at La Bombonera and that no offer could tempt him away.

"I'm going to carry on at Boca, whether Napoli, Chelsea or anyone else comes," he said. "I'll continue here to fight with my team-mates.

"I always try to do the best for the club and my idea has always been to retire at Boca."

Speculation over Tevez's future had increased after Boca's elimination from the Copa Libertadores at the hands of Independiente del Valle.

"Everything that is said is just rumour," he said. "Whenever an objective at Boca isn't achieved, you almost always make a novel out of it, and I'm used to that. But I see myself at Boca for a long time.

"I signed for three years and never doubted what I signed for, or the love I have for the shirt."