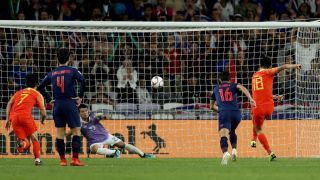 China kept Marcello Lippi's dream of lifting the Asian Cup alive after they came from behind to beat Thailand 2-1 and clinch a place in the quarter-finals.

Supachai Jaided's goal broke the deadlock at Hazza Bin Zayed Stadium as China struggled to deal with Thailand's quick passing and movement, but the War Elephants began to tire in the second half.

The game turned on its head inside four minutes when China substitute Xiao Zhi equalised from close range before Gao Lin converted a penalty.

Lippi is expected to bring his time as China coach to an end after this tournament but, in halting Thailand's best run in the competition since 1972, they showed the kind of heart and determination that could take them all the way.

Wu Lei tested Sivarak Tedsungnoen with an angled shot from 10 yards that the goalkeeper saved at his feet before Theerathon Bunmathan's dipping free-kick at the other end was tipped over the crossbar by China's Yan Junling.

Jaided flashed a warning shot just wide moments before he opened the scoring. Pansa Hemviboon's effort on goal dropped at Jaided's feet and he took a touch before sweeping it home on the turn from the edge of the six-yard box.

Yu Dabao met Hao Junmin's wicked cross with a powerful header on the cusp of half-time but it flashed wide of the target as China were left frustrated.

Lei's quality outshone that of his team-mates as China probed for an equaliser and much of his approach play went to waste before Dabao squandered a gilt-edged chance to score, firing straight at Tedsungnoen's legs from close range with the whole goal to aim at.

With 25 minutes left on the clock, Zhi had a towering header saved by Tedsungnoen but the substitute pounced on the rebound and bundled home China's equaliser.

Before Thailand could regroup Lei picked out Lin in the box where he was scythed down by Chalermpong Kerdkaew, and the forward lashed the ensuing spot-kick into the top-left corner of the net.

Lei soon had a goal disallowed but by then Thailand's resistance had been all but shattered and Junling made sure of the victory when he saved Hemviboon's powerful shot from the edge of the box in stoppage time.