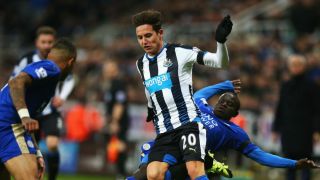 Thauvin has struggled to establish himself since signing for the Premier League side for a reported fee of £12million in August, starting just three top-flight fixtures.

The 22-year-old's omission from the squad for the win over West Ham United sparked suggestions he was on the brink of an exit, but coach Steve McClaren cited an ankle injury as the reason for his absence.

Links of a return to Marseille remain, however, and Romao believes a move would be beneficial to all parties.

"There are many injured [at Marseille] so strengthening the team would not make it worse," said Romao.

"I'm sure that the return of Florian Thauvin would be good for us as well as him."

Romao confirmed he will remain at the Stade Velodrome until his contract expires at the end of the season despite reports linking him to Sunderland, though he is unsure if he will extend his deal.

"I have no doubt I'll stay at Marseille at least until the end of the season," Romao added.

"We have not yet discussed an extension. I am here, we will see at the end of the season. First of all, I want Marseille to improve.

"I would prefer to play more, I work for that, but I accept the choices of the coach."