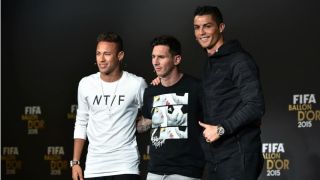 Thiago Silva believes signing Barcelona ace Neymar could be a bridge too far for Paris Saint-Germain, but feels his team-mate Lionel Messi or Real Madrid star Cristiano Ronaldo could be more realistic options.

The Ligue 1 champions are expected to make a high-profile signing ahead of next season due to the potential departure of Zlatan Ibrahimovic, who has an expiring contract, and each of this year's Ballon d'Or finalists have been linked with PSG.

Thiago Silva had already suggested Ronaldo could make the move to the Parc des Princes and he has now claimed Messi would be a realistic transfer target as well.

"I like Neymar a lot, but I think Barcelona will not allow him to leave," Thiago Silva told France 3.

"It would perhaps be easier for Barcelona to let go of Messi. Could Messi come to PSG? Perhaps... I mean, why not? Everything is possible...

The 23-year-old Neymar has a contract with Barcelona until June 2018, but the Catalans are believed to be ready to offer the Brazil international a new and improved deal.

Messi, 28, and the 30-year-old Ronaldo each have contracts until June 2018 as well, with Barcelona and Real Madrid respectively.