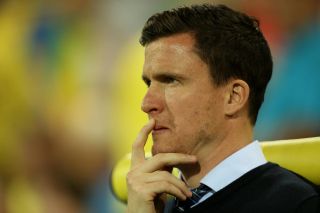 The Jags boss saw his side lose out 6-5 on penalties to Hamilton after an entertaining 2-2 draw at the Foys Stadium.

Thistle debut boy Rafa De Vita was the guilty party after seeing his spot-kick saved but Caldwell – whose side can claim top spot in Group F by beating Clyde at home on Wednesday – insisted he was barely ruffled during the post-match contest.

He said: “It was an entertaining game for the supporters but these penalties are stupid. I don’t know why they’re in the competition.

“It’s rubbish. It’s the most calm I’ve ever been in a shoot-out because it’s pointless.

“It didn’t matter to either team, maybe in other groups it’s different but it doesn’t make a huge difference to anything in this one.”

Accies youngster Ross Cunningham looked to have stolen the headlines as he marked his first start for Hamilton with a stunning double.

The 21-year-old cancelled out Ryan Williamson’s opener then curled home a sensational second to put the hosts ahead.

Shea Gordon swept Thistle level but Caldwell’s side got a lucky break with Aaron McGowan’s penalty miss as the game finished square.

After 11 successful spot-kicks, Owain Fon Williams denied De Vita to give Accies the extra point which sees them close to within one of the Jags with one game left.

But Hamilton boss Brian Rice’s main concern was with midfielder Ronan Hughes, who was carried off on a stretcher after a 10-minute hold-up wearing a neck brace after a collision with Joe Cardle.

He said: “It was really concerning the game had to be stopped for so long because of the injury to Ronan.

“It’s his neck or collar bone, I’m not sure. Hopefully he’ll be OK.

“Brian Easton had to go off as well. I don’t think it’s too serious. I think he just rolled his ankle and went off as a precaution.”