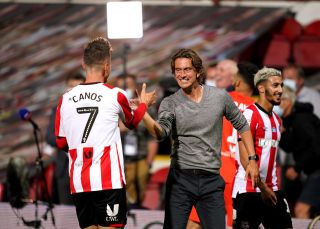 Thomas Frank vowed to celebrate Brentford reaching the Championship play-off final, but insisted the job is not done yet.

The Bees beat Swansea 3-1 in the final game at Griffin Park to move a step closer to the Premier League.

Brentford overturned Swansea’s one-goal lead from the first leg within the first 15 minutes through goals from Ollie Watkins and Emiliano Marcondes.

Bryan Mbeumo added the third just after half-time and although Pontus Jansson’s mistake allowed Rhian Brewster to make it a nervous last 15 minutes the hosts, who last week blew their chance of going up automatically, took a big step towards redemption.

Griffin Park has seen a lot but this is up there#BrentfordFCpic.twitter.com/DKgsNGn99V— Brentford FC (@BrentfordFC) July 29, 2020

Frank said: “We were very irritated after the game over there. My adrenaline never stopped until today after this game.

“We talked about not coming off the pitch without reaching the final. The message was we needed to start faster than we ever had before and we did that.

“It was nervy. At 3-0 we should just ease through, or potentially score the fourth goal. We made a mistake we shouldn’t make.

“Of course I’m extremely pleased and happy. It’s a very nice moment. I will celebrate tonight with a glass of red because we have achieved something good. But we will go to the final to win it. ”

Seven straight wins after lockdown had left promotion tantalisingly within Brentford’s grasp, before successive defeats by Stoke and Barnsley consigned them to the play-offs.

That mini implosion set up one, final, dramatic match at Griffin Park, their home for 116 years, before next season’s move to a new 17,250-capacity ground by Kew Bridge.

They were able to bid farewell in style and a memorable victory means the Brentford Community Stadium could still be hosting top-flight football in September, with the Bees determined to make the most of their second chance and become the 50th different team to play in the Premier League.

Frank added: “We have had a very good season, the best in modern times at Brentford. I’m proud of the players. We will go into the final with momentum and massive belief, and we will leave everything out there as well.

“It means a lot to me, I’m very pleased, very happy and I will sleep well tonight. But the next task is to win the final.”

Bees owner Matthew Benham took to the pitch for a kickabout after the match as a number of fans congregated outside, singing his name.

His club will now head to Wembley on Tuesday for a £170million showdown with Cardiff or, more likely, their west London neighbours Fulham.

The promotion dream is over, but what an effort from the boys this season! 👏 pic.twitter.com/dWmRNbUWpp— Swansea City AFC (@SwansOfficial) July 29, 2020

For Swansea, who had finished 11 points behind the Bees, it was heartbreak as they were unable to repeat their late goal avalanche on the final day which saw them gatecrash the play-offs.

“It’s painful at the moment, when you’re in the semi-finals and you have everything to play for, you can only be disappointed after the game.

“At the moment it’s difficult to see past tonight’s defeat because we really believed we could do it. We just fell short on stuff we ask for on every single game.”