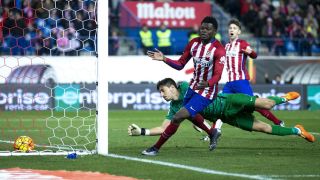 Atletico Madrid midfielder Thomas Partey has made a habit of making an impact off the bench, but the youngster is not getting ahead of himself.

Thomas was a second-half substitute and scored the winning goal in Atletico's 1-0 win over Levante on Saturday to send his side to of the La Liga table.

His match-winning effort followed another impact off the bench against Rayo Vallecano on Wednesday, when Thomas set up the first goal in a game where Atletico struggled to break down the opposition.

Coach Diego Simeone was quick to heap praise on the young midfielder after his efforts on Saturday, saying his introduction increased the fluidity of Atletico's play, but Thomas said he was keeping himself grounded and was just happy to help the team in whatever capacity he could.

"Everyone is here to play. The team is a good one and anyone can come in and help the team. You just have to be happy to win," Thomas told the club's official website.

"I still need to learn things and I am still in the learning stage.

Atletico are top of La Liga on 41 points, two points clear of title holders Barcelona, who were held to a goalless draw by Espanyol.