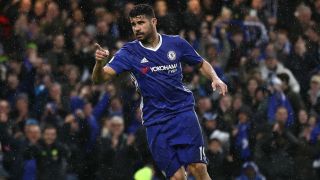 The owner of Chinese Super League side Tianjin Quanjian claims that deals have been agreed with "two or three stars" of world football.

Chelsea striker Diego Costa was heavily linked with a CSL switch in January and is rumoured to have signed a pre-contract agreement with the club ahead of a transfer that could cost as much as €90million.

And he expects major deals to be completed as soon as fees have been agreed with other clubs.

"The only thing I can reveal right now is that we have agreed terms with two or three stars," he told Tianjin Daily. "The players have no problem with the deals and their clubs are also willing to let them leave.

"The only issue that remains unresolved is reaching agreements with their respective clubs over the transfer fees."

Asked about their interest in Costa, Cavani, Falcao, Aubameyang and Kalinic, he replied: "It's safe to say we did make contact with all of those players, some of whom are still in talks with us."

Tianjin, coached by Fabio Cannavaro and with Alexandre Pato and Axel Witsel on their books, are set to spend heavily after securing promotion to China's top flight last season.

However, Shu stressed that they will not be held to ransom by European clubs looking to offload players in lucrative deals.

"The player we buy should satisfy two requirements. First, he is suitable to the style of football we play; and second, he has the right attitude," he said.

"However, if some clubs are intent on taking advantage of us, we won't allow ourselves to get ripped off. We won't lose our mind."