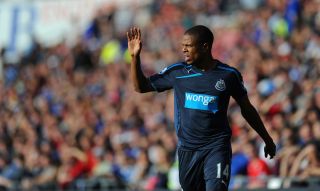 Frenchman Remy, who joined for the season from QPR in August, initially struggled with a calf injury on his arrival at St James Park but has since made a big impression.

The 26-year-old now has five goals in as many Premier League appearances, including a double in the 2-1 win against Cardiff last weekend.

The striker has helped Newcastle to put an indifferent start to the season behind them and win three of their last five fixtures in all competitions, and Tiote is keen to see him become a permanent part of the side.

"Loic is very important for us. He's a great player and he scored two more fantastic goals (against Cardiff)," Tiote told the Northern Echo.

"I hope he will continue to score because we need him and we need his goals, they are so important for us and at Cardiff they were the difference between winning and losing.

"He's going to be important for us this season and I think if he continues to score and play like he did we will be able to finish in the top 10.

"I hope the chairman will buy him. You never know, but he's already shown how important he is for us and it would be a big loss if he didn’t sign at the end of the season."

Remy will hope to continue his fine form when Newcastle host Liverpool after the international break on October 19.