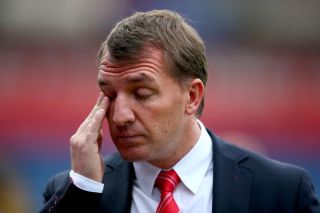 While Liverpool, who entered the game level on points with Manuel Pellegrini's men but nine goals worse off, were never likely to lift the trophy without their main rivals City - who complete their season by facing Aston Villa and West Ham at home - slipping up, the result was a bitter disappointment for Rodgers.

Asked if his side's title hopes had been dashed, he told Sky Sports: "Yeah; we needed to win.

"We had to keep the pressure on.

"Manchester City have two home games and I think they will go on and win them."

Rodgers attempted to emphasise the positives of a good campaign that have seen Liverpool perform much better than last year’s seventh-placed finish.

However, the Liverpool boss could not hide his disgust at the defending that proved so costly after goals from Joe Allen, Daniel Sturridge and Luis Suarez had put the visitors in such complete control.

"I am very disappointed we conceded the three goals," he said. "It was real poor defending that cost us there.

"With the comfort we have and the quality we showed to go 3-0 up, you have got to manage the game better than that."