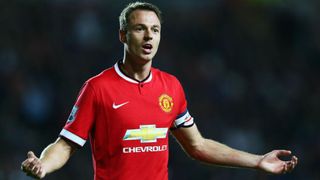 United are 11 points adrift of the leaders with five games to go following the 1-0 loss at Stamford Bridge and the Northern Ireland international thinks catching Jose Mourinho's side is a step too far.

The Chelsea reverse was the final game of Evans' six-match ban for spitting at Newcastle United's Papiss Cisse in March and he is expected to return against Everton on Saturday.

"Obviously, winning the league has probably gone, but there is still pressure at Manchester United," he told MUTV. "I think the lads have been thriving on that over the last couple of months.

"I think it'll be good to end the season with a big challenge for us, but it's one I like to think we're up to.

"We've always believed and he [Louis van Gaal] has always believed in us. There are five games to go in the season and we've got to make sure we carry those standards on.

"We've been used to that over the years, having pressure, and, this time, it's to qualify for the Champions League."