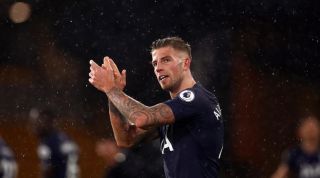 Toby Alderweireld has hailed Jose Mourinho as an “unbelievable" man-manager and explained how the Tottenham boss persuaded him to sign a new deal.

The Belgium international put an end to speculation about his future when he penned a contract extension in December.

Alderweireld committed his future to Spurs until summer 2023, having previously been linked with a move away from the club.

And the former Atletico Madrid man has explained how Mourinho convinced him to stay put.

"For me Jose Mourinho is an unbelievable people-manager, someone who you want to travel eight hours by road to play on a Sunday after your son is born," Alderweireld told the Daily Mail.

"That’s the feeling you get, the feeling I have for him. You don’t want to disappoint him.

"I guess it looks like I am happier now because the former manager left and I signed a deal. But I was happy back then as well.

"There were a lot of things going on behind the contract but I’ve always been happy at Spurs and will always do my best for Spurs.

"The more options I got the more I had to choose what I wanted and I was just like: 'I want to stay at Spurs'.

"With a second child on the way I just wanted to stay and when the new manager came in he just asked me if I wanted to sign.

"After that the process went a little bit quicker because he did some things. I don’t know what the club’s tactics were. But when Jose came in it moved a bit quicker."

Mourinho's side, who are currently four points adrift of Chelsea in the final Champions League qualification spot, host top-four rivals Wolves on Sunday.

Spurs will then turn their attention to the FA Cup, with their fifth-round clash with Norwich scheduled for Wednesday.