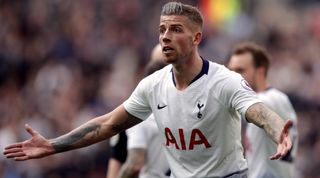 Manchester United could make a move for Tottenham defender Toby Alderweireld when the transfer window reopens in January.

Alderweireld is out of contract next summer and could therefore be available for a cut-price fee in the mid-season market.

A release clause in the Belgium international’s deal meant he was available for £25m until late July, but Tottenham surprisingly received no bids for one of their key players.

United did strengthen at centre-back in the summer, spending a world-record fee for a defender in acquiring Harry Maguire from Leicester for £80m.

Alderweireld’s advancing years – the former Atletico Madrid man turns 31 in March – may have played a part in United’s decision to not submit an offer.

However, according to reports in Italian publication Tuttosport, the Reds will renew their interest in the Spurs stopper in January.

Solskjaer’s side have endured a tricky start to the season, winning only two of their first seven Premier League matches to sit 10th in the table.

United are already 12 points adrift of table-topping rivals Liverpool and have looked vulnerable defensively in several of their games so far this term.

However, Alderweireld may be tempted to see out the season in north London, before seeking pastures new at the end of the campaign.

Moving on a free transfer would probably allow the Belgian to negotiate a higher wage and signing-on fee.

He will also be able to speak to foreign clubs in January and could even sign a pre-contract agreement with a side outside England.

United face AZ Alkmaar in the Europa League on Thursday, before a Premier League meeting with Newcastle on Sunday.

Tottenham and Alderweireld will be looking to bounce back from Tuesday’s 7-2 thrashing by Bayern Munich when they face Brighton on Saturday.