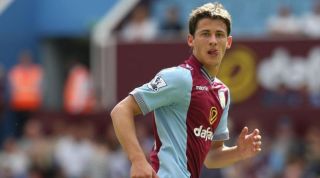 The 24-year-old's debut season at Villa Park has not been as fruitful as manager Paul Lambert would have liked, with the Bulgarian only starting six times in the Premier League.

It had been hoped that Tonev, who impressed for Lech Poznan last season, could provide Villa with goals and assists from midfield, yet he has struggled to make an impact.

Tonev, who has not started a game since December, told Villa's official website: "I hoped I would play more but I obviously needed time to adapt. But now I feel far more confident.

"It was difficult when I came here. I was in a new country and had to learn a new language. But I'm far more comfortable with everything now.

"I feel much better. The Premier League is very hard but I feel I have settled in.

"I am confident I will have more impact next season and hopefully also in the final games of this season."

Villa have not won any of their last five Premier League matches and find themselves five points above the bottom three with four games still to play.