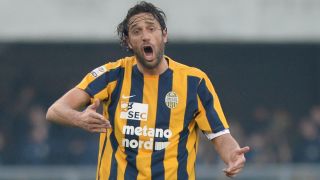 Italian veteran Luca Toni is yet to decide on his playing future, despite reports the striker is set to retire at the end of the season.

Toni turns 39 in May but has four goals in nine appearances for Verona this term, having topped the 20-goal mark in his first two campaigns at the club.

The well-travelled striker has enjoyed a career spanning over 20 years, having made his first senior appearances in Serie C with Modena back in 1994-1995, before breaking into Vicenza's Serie A set-up in 2000, eventually playing for Fiorentina, Bayern Munich, Roma and Juventus, representing Italy 47 times, winning the World Cup in 2006.

His remarkable career may not be over just yet either.

"Everyone says I signed on to become a director of Verona, but the truth is I am still a football  player and I haven't decided yet whether I'll retire in June or in 2017," he told Tuttosport newspaper.

"I've been supposed to quit for the last four years and I'll make a decision in the spring. A lot will depend on how the season goes and how I'm feeling, so whether I want to keep challenging myself all over again."

One thing the Italian great will not be doing, however, is turning to coaching once his playing days are finished.

"No, it's far too stressful. I've seen some of my ex-team-mates get wiped out so fast," Toni said.

Toni returns to league action with Verona on Wednesday, when he will line up against one of his former clubs and Serie A title chasers Juventus.

"It's better we face them now after the Christmas break, so hopefully some will still be distracted. Juve are clearly stronger, but we can cause them problems," he said.