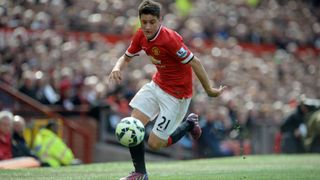 Manchester United will have achieved their primary aim for the season if they finish in the Premier League's top four, according to midfielder Ander Herrera.

In their first season under Louis van Gaal, United retain hope of a second-place finish with four games remaining.

Herrera is eager to overhaul Manchester City and Arsenal, both two points better off with the latter holding a game in hand, but feels his club can be content with their progress following a seventh-place finish under David Moyes last term.

"We have had very good moments and others not so good," the Spaniard told Sky Sports.

"But I think everyone knew in the beginning of the season it was not going to be an easy season because at the club we have had a lot of changes - new players, new staff - so the first objective we had was to be in the top four.

"We want to finish second but now we have to be prudent.

"We have [games against] West Brom, Crystal Palace [coming up]; of course we wish to be second but it's not going to be easy.

"The most important thing is that now we are in the top four but we have to avoid the fourth place because we will have to play Champions League qualification."

United hold a seven-point advantage over Liverpool and Tottenham ahead of the weekend's fixtures.