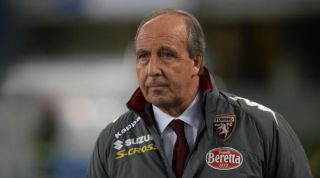 The Turin-based club's hopes of securing European football were boosted by Sunday's 2-0 victory over lowly Udinese, which extended their unbeaten streak to five games.

Torino climbed up to sixth in the standings on 52 points, just five points adrift of Inter Milan, who occupy the fifth and final European spot with three games remaining.

This season caps a huge turnaround for Torino, who avoided relegation last campaign after finishing 16th, seven points above the drop zone.

"We want to put ourselves up for the challenge. I will admit that from the first day of pre-season our objective was to work on a group of young and not-so-young players to create a solid group for the future.

"Clearly, now that we are up there with three rounds to go and as of today we'd be in Europe, it's only natural that we try.

"I'm glad the fans have rediscovered the pride of cheering for the Granata."

Ventura added: "Torino have grown in terms of mentality. We have a structure now, our own way of reading the tactical situations.

"I think that next season, based on the transfer campaign, Torino's objective must be to do even better than this year."

Torino end the season with trips to Chievo and Fiorentina, and a home fixture against Parma.