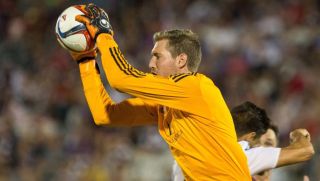 Toronto FC has found a goalkeeper.

For Toronto, it was well worth the price paid.

“Improving our defense has been a stated priority for our club this offseason," TFC general manager Tim Bezbatchenko said in a club statement. "Bringing in Clint helps to solidify our defensive group, and with Clint on board we are confident in our collection of goalkeepers across the first team and TFC2.”

Irwin, 26, joins TFC after spending the past three seasons establishing himself as a top-tier professional in Colorado. He won the starting job with the Rapids in 2013 and has since played in over 90 matches in all competitions for the club. The North Carolina native is expected to become the central figure in a rebuilt TFC defensive unit that also includes former Rapid Drew Moor and right back Steven Beitashour as newcomers to BMO Field.

“We are very excited about what Clint will add to our group and look forward to his quick transition into our team, which is aided by his familiarity with Drew in Colorado,” Bezbatchenko added.