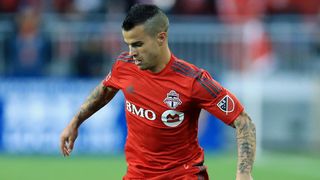 After ending his goalscoring drought courtesy of a hat-trick, Toronto FC star and reigning MLS MVP Sebastian Giovinco announced he is back.

Giovinco had gone eight league matches without scoring but a three-goal haul in Toronto's 4-1 drubbing of DC United changed all that on Saturday.

And the Italy international forward snapped his drought in style with two stunning first-half free-kicks, with the hat-trick completed late in the match.

"Yes, I'm back," Giovinco said post-match after helping Toronto improve to 27 points from 20 matches, enough for fifth position in the Eastern Conference.

"I'm happy to have scored. We're still a little behind [in the standings], but it's a good start.

"Like I've said before, for a striker, scoring is always very important. Not scoring for eight games is really difficult. I just tried to stay calm.

"We tried to stay together during that time, and hopefully this is going to push us forward."

There is something about Giovinco and DC, having scored six goals in four matches against the American capital club.

"It just happened. As a striker, [I'm] always trying to find goals," he added.

"Maybe [I'm] apologetic that it was against DC that I scored so many, but it has to be done."