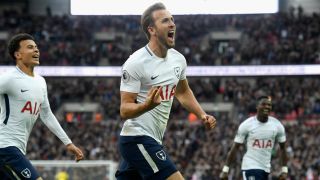 Kane's first league goal at Wembley and a Son Heung-min strike ensured Tottenham raced into a two-goal lead inside 12 minutes.

Mohamed Salah briefly got Liverpool back into the game, but Dele Alli netted for first time in six league matches before half-time to keep Spurs in control.

And Kane struck again to seal a statement victory early in the second half, Spurs' first win in 10 Premier League meetings against the Reds.

This damaging defeat in front of a record Premier League crowd leaves Liverpool ninth in the table, 12 points behind leaders Manchester City after a troubling start to the season for Klopp.

Liverpool have leaked 16 goals in nine games – their worst top-flight defensive record at this stage of a season since 1964-65.

The first shot of the match produced the opener inside four minutes, in-form Kane striking for the hosts with a goal for which Liverpool could only blame themselves.

Dejan Lovren was flat-footed in dealing with Kieran Tripper's throughball, allowing Kane to get in behind and take advantage of a poor decision by Mignolet - who raced off his line - by taking it past the goalkeeper and applying a left-footed finish from 12 yards.

Kane's goal was the 1,000th Liverpool have conceded in the Premier League are the 6th team to concede that manyVia October 22, 2017

It was soon two, with Spurs keeper Hugo Lloris starting a quick counter-attack with a long throw that Lovren completely missed as he attempted to head clear on the halfway line, giving Kane the chance to cross for Son to guide a first-time, left-footed finish past Mignolet – the South Korea international's first top-flight goal since May.

It could have been worse for Liverpool, as Son fired a powerful effort off the crossbar after a Christian Eriksen pass opened up the struggling away defence once again.

Liverpool threatened a comeback in the 24th minute when Kane lost possession and an excellent pass from Jordan Henderson released Salah, who outpaced Serge Aurier and Jan Vertonghen down the right channel before scuffing a right-footed finish in off the far post.

At the other end, Mignolet raced out to deny Son with his legs after a fine Alli pass and Klopp had seen enough of his ineffective back-line, taking off Lovren to introduce Alex Oxlade-Chamberlain in a tactical re-shuffle.

But Spurs struck again in the third minute of first-half stoppage time, Joel Matip only heading a deep Eriksen free-kick as far as Alli, who volleyed in from just inside penalty area to secure a deserved two-goal lead at the interval.

After 56 minutes, the rampant Kane inflicted further damage, smashing in a rebound from six yards after Mignolet had flapped at Tripper's free-kick prior to an effort from Vertonghen being cleared off the line by Roberto Firmino.

Liverpool almost responded when Philippe Coutinho's left-footed curler from 20 yards was clawed out of the top corner and onto the bar by Lloris.

Lloris then had to keep out decent efforts from James Milner and Salah to ensure there were no late nerves in a fourth consecutive league win for Spurs, who will hope there are no ill-effects for Kane after he came off in the final minutes holding the back of his leg.