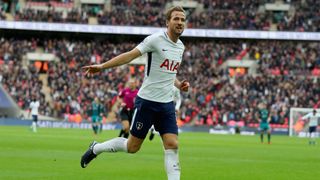 Record-breaking Harry Kane stole the show with a second hat-trick in as many games as Tottenham smashed Southampton 5-2 at Wembley, the striker setting a new record of 39 Premier League goals in a calendar year in the process.

The England star's treble against Burnley on December 23 moved him level on 36 with Alan Shearer and he never looked as though he was going to struggle with the expectation, beating the record, which had lasted for 22 years, in the 22nd minute as part of an immense performance.

Kane confirmed his spot in the Premier League history books with one of easiest goals he is ever likely to score, heading in from close range to end Saints' fairly feeble early resistance.

But there was even more to come, as he doubled his tally for the day just before the interval. It was another simple finish, though it came at the end of a brilliant incisive Spurs move and saw him usurp Lionel Messi to become Europe's top scorer for 2017.

Although Kane stole the headlines with his display and records, Dele Alli was similarly exceptional and got in on the act the start of the second half, before setting up Son Heung-min for number four.

Sofiane Boufal did pull one back, but Kane completed another record – becoming the first player to score six Premier League hat-tricks in a calendar year - before Dusan Tadic's late consolation did little to lift Southampton's festive spirits, the visitors having now lost three of their last four top-flight games.

Spurs looked every inch a side out to wrap victory up as early as possible, attacking with verve right from the start.

The first real chance arrived after just six minutes, as Alli intercepted Matt Targett's wayward pass and fed Christian Eriksen in the right side of the area, with the Denmark international's squared ball into the danger zone turned just wide by Kane.

The England star was not to be denied in the 22nd minute, though.

Eriksen delivered a free-kick from the left flank and planted it right on Kane's head, giving the striker an inexplicably easy finish from four yards in the crowded area to clinch his record.

Danny Rose almost gifted Saints a way back into the game a few moments later when his cushioned header almost looped over Hugo Lloris, but the goalkeeper managed to palm it on to the post and then end the danger.

And Spurs took full advantage of that let-off to double their advantage late in the half - Son latching on to Alli's exquisite defence-splitting pass and squaring the ball across the face of goal for Kane to supply another simple finish.

Southampton initially started the second half well, with Mario Lemina going close with a 20-yard effort which struck the crossbar.

But any hope of a comeback swiftly evaporated, as Alli scored a fine third, cutting in from the left and placing a controlled effort into the bottom-right corner after 49 minutes.

And with their very next attack, Spurs increased their lead to four.

Alli was inspirational again, darting at the Saints defence and picking out the run of Son, who coolly slotted past the helpless Fraser Forster.

Boufal pulled one back with a left-footed drive which snuck underneath Lloris, but Kane restored the four-goal cushion 23 minutes from time, racing on to Alli's pass and clipping a marvellous chip over Forster.

Tadic scored Southampton's second with a lovely volleyed finish which just about evaded Lloris with eight minutes left, but it was too little, too late, as a Kane-inspired Spurs marched to a fourth win from five league games in empathic style.