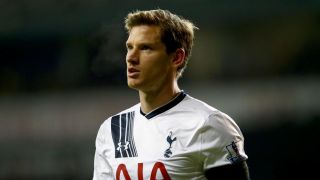 Vertonghen was substituted 15 minutes from time at Selhurst Park, having fallen awkwardly following a clash with Palace striker Connor Wickham.

On Monday, the Football Association charged Wickham with violent conduct in relation to the incident, where he appeared to swing an elbow at Vertonghen.

And the Belgium defender, a Premier League ever-present for Spurs this season, is now set for a significant spell on the sidelines, although the club did not confirm the expected length of his absence.

"Further assessment and scans have confirmed Jan Vertonghen sustained damage to his medial collateral ligament in his knee at Palace," Tottenham said on their official Twitter account.

"Our medical staff will continue to monitor his progress during his rehabilitation to determine when he will be ready to return to training.