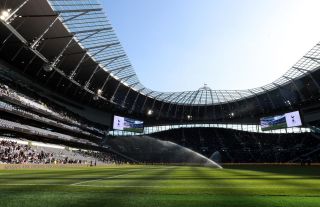 After 689 days away, Tottenham are finally returning home.

But it is not the house they left in May 2017, when they said goodbye to White Hart Lane, their base of over 100 years, that they are going back to.

Instead, awaiting them is a majestic new 62,062-seater arena that is going to provide a fantastic platform for the club to kick on and try to reach the top echelons of English and European football.

They may not have the best team in Europe, but they will have the best stadium, one which will provide a blueprint of how football arenas of the future should be built.

The wait for the club to get back on to the Tottenham High Road has been painstaking as the project – which is reported to cost around £1billion – has suffered frustrating delays.

While the Tottenham Hotspur Stadium, which is what it will be called until the naming rights are sold, was rising out of White Hart Lane’s ashes, Spurs had almost two years of trudging to the wrong part of the capital to play their home games at Wembley.

And that took its toll, not only on the fans, but also on the players and manager Mauricio Pochettino, who has been more desperate than most to come home.

There were some memorable nights at the national stadium as Spurs beat Real Madrid, Manchester United and Borussia Dortmund twice, but playing there never felt anything other than an inconvenient necessity.

However, there will not be one person who has Tottenham running through their blood, that will not say the wait has been worth it.

When the new place finally opens against Crystal Palace on Wednesday, with its iconic 17,500-seater single-tier stand, already dubbed the White Wall, in full voice, no one will be left thinking about the Jubilee Line or the queues at Wembley Park.

Tottenham’s approach to building their new home was to take the best parts of other stadiums around the world and make them better.

And they have achieved it, yet still managing to echo their former ground.

The closeness of the seats – which at the shortest point are just 4.9 metres from the pitch – recreates the tight feel of White Hart Lane while vertigo sufferers should beware, the 35-degree incline of the stands is the highest allowed under British legislation.

It all creates an imposing and intimate feeling, which will help provide a cauldron of atmosphere, as will the acoustics which were designed by experts who are involved in staging U2 tours.

As if to ram home the vast expanse of their new home compared to their former, they have an incarnation of the famous golden cockerel that stood on top of the South Stand at White Hart Lane that is twice as big.

But there is so much more to this stadium than somewhere just to watch a game of football.

Spurs have built a facility that is going to change the matchday culture for supporters.

No longer will the fans be piling through the turnstiles at five to three and, barring a terrible result, they will no longer be filing out at five to five.

Spectators will be able to enjoy a fuller experience, one much more akin to an American sports stadium where you can make a whole day of coming to watch their side play.

Underneath the South Stand is the Market Place, a bustling hub of food outlets and bars, fitted with mind-boggling technology which can fill a pint glass up from the bottom in five seconds, not to mention the microbrewery installed in another part of the stadium.

It is all geared towards getting fans to arrive at the ground early and stay later, with other live games, DJ sets and live music all being played after full-time.

The stadium will soon pay for itself, though supporters will not be able to use cash in the stadium.

Of course, the longevity of the post-match festivities will largely be dependant on results, something Pochettino believes will be enhanced by their new surroundings.

Spurs have everything in place off the pitch, now it is time to deliver on it.