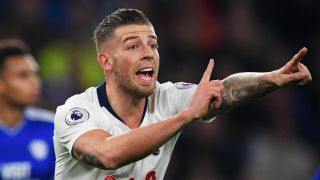 Tottenham have taken up their option to extend Toby Alderweireld's contract until 2020.

The centre-back's deal was due to expire at the end of the season, but Spurs have tied down the Belgium international for a further 12 months to avoid losing him on a free transfer.

Reports in England say Alderweireld's extension includes a clause meaning he can leave the club for £25million before the end of the Premier League's next transfer window.

Speaking last month, manager Mauricio Pochettino confirmed it was an "obvious" decision to exercise the option on the former Atletico Madrid man's deal.

Alderweireld was linked with Manchester United last year but has played an important role for Spurs this season, making 19 appearances in the Premier League.

The 29-year-old moved to north London from Atletico for a reported fee of £11.8m after spending a season on loan at Southampton.

The Club can confirm that we have activated the option to extend @AlderweireldTob’s contract until 2020.— Tottenham Hotspur (@SpursOfficial) January 4, 2019