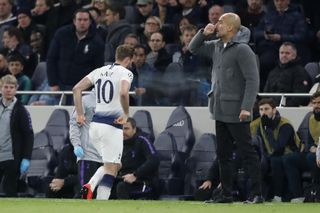 Tottenham will begin the all-too-familiar process of allowing Harry Kane’s ankle injury to settle down before they assess how serious it is.

It immediately looked serious as Kane was unable to put any weight on his left foot and was helped down the tunnel, later leaving the ground on crutches and with the joint in a brace.

Mauricio on @HKane: "It doesn't look good, but we need to check over the next few days. It's so painful." #UCL ⚪️ #COYSpic.twitter.com/ToKBPNBikd— Tottenham Hotspur (@SpursOfficial) April 9, 2019

The club’s medical staff will allow any swelling around the joint to subside before a scan will reveal just how bad it is.

Spurs boss Mauricio Pochettino admitted that the injury could well end the England striker’s season, which would be a massive blow to the club’s hopes of Champions League progression and also qualification for next year, with Spurs still locked in a top-four battle.

England manager Gareth Southgate is also likely to be on the phone to see whether his captain will be available for the UEFA Nations League finals in June.

Kane is getting used to beginning the rehabilitation process as this is his fifth ankle injury in two-and-a-half years and comes just six weeks after his return from his previous one.

The Spurs talisman appears susceptible to ligament damage whenever he rolls or impacts his ankle in a challenge, though he does have an impressive recovery rate.

In each of the last three incidents Kane recovered ahead of schedule and earlier this year – aided by a spell in the Bahamas – he returned two weeks before expected.

That will give Spurs hope, but Pochettino will have to prepare to be without his top scorer for the remainder of the season.

Spurs will look to Son Heung-min to step into the spotlight and the South Korean did not take long to do it as he hit the winner in the 1-0 win against City after Kane went off.

Son took centre stage during Kane’s last absence, scoring four goals in four games, while Fernando Llorente is highly likely to get a run out against already-relegated Huddersfield on Saturday.