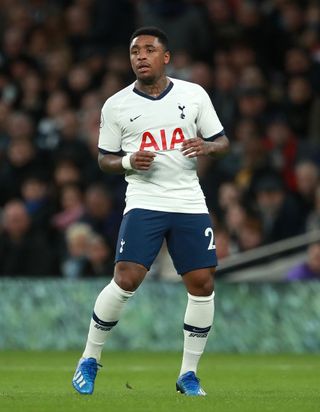 Tottenham’s injury nightmare continued with the news that Steven Bergwijn is out for an “extended period” with a sprained ankle.

The Dutch winger, who joined Spurs from PSV for £25million in January, suffered the injury in the closing stages of Saturday’s 1-1 draw with Burnley.

It is a major blow for Jose Mourinho who loses another attacking option, with Harry Kane and Son Heung-min already in the treatment room.

A statement on the club’s website said: “Following assessment and examination by our medical team, we can confirm that Steven Bergwijn suffered a significant sprain to his left ankle during our match against Burnley.

“The Netherlands international will now undergo an extended period of rehabilitation where his progress will continue to be assessed.”

Ben Davies is also out of the second leg of the Champions League last-16 tie with RB Leipzig on Tuesday with a suspected hamstring issue.

The left-back has only just returned from a significant ankle injury sustained in Mourinho’s first game in charge in November and would leave central defenders Jan Vertonghen and Japhet Tanganga or winger Ryan Sessegnon filling in.

There was better news at the club’s Hotspur Way training ground, though, as Kane took to the field for a personal rehabilitation session as he nears a comeback from a hamstring injury.

The England captain has not played since New Year’s Day when he ruptured a tendon at Southampton and his season looked in doubt.

But the striker is ahead of schedule in his recovery, targeting a return at the beginning of next month, and was seen taking part in sharp passing drills in the 15-minute session that was open to the media.

Kane tweeted: “Love being back on the grass with a ball at my feet.”

Spurs will head to east Germany later on Monday, where Mourinho will face the media.

The Bundesliga side have confirmed the game will be played as normal, with fans allowed to attend, after there was some confusion when the German health minister Christian Seifert called for events where more than 1,000 people would attend to be cancelled.

However, the club tweeted on Monday: “OFFICIAL. Tomorrow’s game vs. @SpursOfficial will go ahead as planned with fans allowed to attend.”