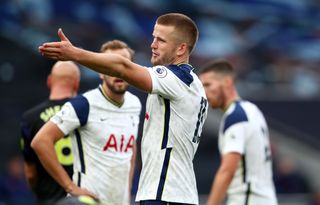 Eric Dier has insisted “something has to change” after finding himself at the centre of a brewing row over the handball rule.

The England international was aghast when referee Peter Bankes awarded Newcastle a stoppage-time penalty on Sunday after Andy Carroll had headed the ball against his arm.

It was the latest in a string of incidents that saw the new interpretation of the rule draw criticism.

Dier told BBC’s Football Focus: “Everyone is on the same page, something has to change.”

Spurs were leading when Bankes was advised to watch a replay following a VAR review of the incident in which Carroll and Dier had gone up in an attempt to meet a Jonjo Shelvey free-kick.

The referee pointed to the spot and Newcastle striker Callum Wilson scored to snatch a 1-1 draw.

Dier said: “In my case, if you look at it as a whole, the foul leading up to the free-kick, the distance between me and Andy Carroll, the fact that I get pushed in my back which people are not really talking about.

“The push in my back is what makes my arm go up, that is a completely natural reaction and if someone does touch you like that, your normal reaction is to go like that.

“Even without the push, he is less than a metre behind me and I don’t really know what more you can do.
“You cannot jump without your hands, you cannot defend without using your arms to balance and move so it is what it is.”

The Newcastle penalty was one of several talking points over the weekend with Crystal Palace’s Joel Ward and Brighton’s Neal Maupay also conceding spot-kicks after handling in the area, while Chelsea’s Kai Havertz survived claims that he had handled the ball in the build-up to Tammy Abraham’s late equaliser at West Brom.