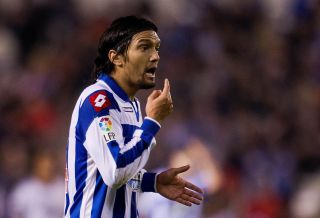 The defensive midfielder moves to the Stadium Municipal from the Spanish Segunda Division side, having spent last season on loan at Deportivo La Coruna.

Aguilar has joined the Ligue 1 club for an undisclosed fee and is likely to fill the void left by Etienne Capoue, who signed for Tottenham last week.

"The player will wear the number 21 this season in Ligue 1."

The club are currently 19th in Ligue 1 after taking just one point from their opening two games, and face high-flying Monaco on Friday.