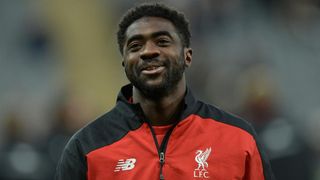 The 35-year-old travelled to Glasgow for a medical and was in the stands to watch the Scottish title-holders' International Champions Cup clash with Leicester City, which finished 1-1.

Rodgers - who took Toure to Liverpool from Manchester City in 2013 - expects the deal to be concluded within the next 24 hours and praised the Ivory Coast centre-back for his performances at Anfield, especially in their run to the Europa League final under Jurgen Klopp last season.

"Hopefully by tomorrow that will be done," he said after the Leicester game, which the Premier League champions won 6-5 on penalties.

"He'll be great for us, I took him to Liverpool for his experience and you saw what he did there. He was so important in the back end of last season, too, in the Europa League.

"He's looked after himself, he's in good condition and he'll be a great addition for us."

Earlier, Toure told Sky Sports: "I am a ready for a new challenge. I'm here to try to be ready and help the team as much as I can.

"The Champions League is a great competition and I always look forward to it."

Toure could make his debut for Celtic in their Champions League qualifier against Astana on Wednesday.

The defender, an Africa Cup of Nations winner in 2015, has spent the last 14 years in England's top flight, having won the Premier League and FA Cup with Arsenal before joining City in 2009.