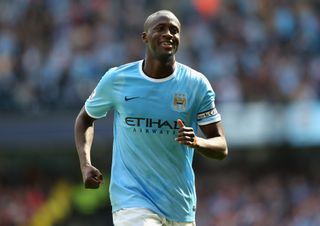 Toure, 30, is having another excellent season at City, having scored 13 goals in his 29 appearances in all competitions.

And having signed a new four-year deal in April last year, a switch away from Manchester is not on the Ivorian's agenda yet.

But when quizzed if he would fancy a move to PSG in the future by French radio station RMC, Toure refused to rule it out, replying: "Everything can be possible. Why not?

"In life, you never know. Everything is going well right now at City, but one never knows. When you have great teams like this, where there are already great players, it attracts.

"Me, working with great players, it is always my goal. It allows you to improve and learn many things.

"In football, you never stop learning. For me, the PSG is a great club."

Toure's City are one of the last 16 teams remaining in the UEFA Champions League and they face a mouth-watering two-legged tie against Barcelona next.

PSG will meet Bayer Leverkusen of the Bundesliga in their clash, and Toure has predicted them to enjoy a strong Champions League, admitting he is worried by their firepower.

"For me, PSG are scary. I have great respect for them too," he added.

"It's a big team. They are a bit like the Man City of France. They have the financial power which enables them to buy great players."