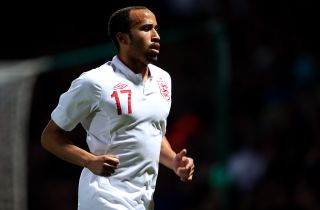 Southampton striker Rickie Lambert, who scored with his first touch in international football against Scotland at Wembley, retains his place for the crunch clashes at the national stadium on September 6 and in Kiev on September 10.

Spurs speedster Townsend has impressed in his last two club games against Dinamo Tbilisi and Swansea City, scoring against the former in a Europa League play-off before winning the penalty which defeated the Swans on Sunday.

Liverpool youngster Raheem Sterling is included in Roy Hodgson's party, as is Daniel Sturridge - the Reds' match-winner in their first two league games.

The Three Lions currently trail Montenegro by two points in their quest to reach the 2014 finals in Brazil, but have one game in hand on their rivals.