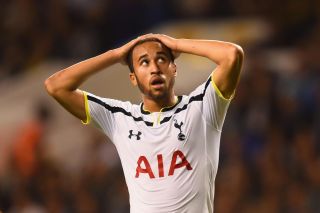 Spurs led 2-1 from last week's first leg in Cyprus and Mauricio Pochettino's fine start as head coach continued as they brushed aside their opponents at White Hart Lane to advance 5-1 on aggregate.

Harry Kane recovered from missing an earlier penalty to put the home side in front on the stroke of half-time, before Paulinho added a second and Townsend completed the scoring from another spot-kick after the interval.

The England international has not made a Premier League start since March after suffering an ankle injury, but Townsend was in a positive frame of mind following Thursday's comfortable victory.

"Hopefully we can make our mark in the competition and go far this year," he told ITV.

"This is my first 90 minutes in a good few months, I'm trying to get back fit. It will take a couple of weeks, maybe a month, and hopefully I'll be back firing like I was last year."

Kane, who had also netted in the first-leg success, hopes his early-season goalscoring form can see him earn a regular starting berth under Pochettino.

"Any top team is going to have competition for places, no matter where you go," he said.

"It's good to get on the scoresheet being a striker, it's just unfortunate I missed a penalty. I think I played well and we did as a team. We had a job to do and it was comfortable in the end."