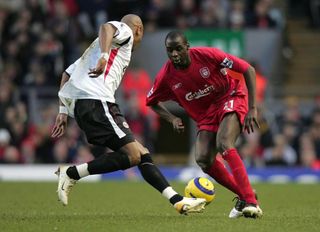 Djimi Traore believes Liverpool’s trophy-winning DNA gives them a huge advantage over Tottenham in the pursuit of Champions League glory.

Traore played in the so-called ‘Miracle of Istanbul’ when Liverpool overcame a 3-0 half-time deficit against Milan to win the 2005 Champions League final after a penalty shoot-out.

Liverpool have not won European club football’s biggest prize since that incredible night in Turkey, but former full-back Traore expects his old club to claim a sixth title in Madrid on Saturday.

“Everybody thinks they are down, but they never give up. That is the DNA of the club.

“When you play for Liverpool and wear that shirt, it makes you different.

“It’s almost as if it makes you a better player, it is something special.

“The fans have an incredible drive and were a massive part of that success in Istanbul.

“It’s not every day you’re 3-0 down in a big game and the fans still cheer and sing for the team. You think right ‘they believe in you and I’m not going to let you down’. You fight more.”

Traore spent seven-and-a-half years at Liverpool after joining from French club Laval in 1999, and played in a team featuring the talents of Jamie Carragher, Steven Gerrard and Xabi Alonso.

But he is reluctant to compare Rafael Benitez’s Champions League winners and the current Jurgen Klopp-led crop, which fell just one point short of Manchester City in the race for the Premier League title.

“Football is different now. I’m not a big fan of comparing generations,” said Traore, now 39, and assistant coach at MLS side Seattle Sounders after finishing his playing career in the United States.

“But what Liverpool have done is fantastic. It was tough for them not to win the league, but to be in the Champions League final twice in a row is a big achievement.

“Everyone knows what happened with Mohamed Salah in the final against Real Madrid last year when he was injured.

“But this is a second chance for them and I expect Salah to be very motivated against Tottenham.”

Liverpool’s ninth European Cup or Champions League final is in sharp contrast to Tottenham’s first after Mauricio Pochettino’s side staged an unlikely run to Madrid.

Spurs also finished a whopping 26 points behind Liverpool in the Premier League and lost twice to the Reds this season, suffering 2-1 defeats at Wembley and Anfield.

Checking in for training.— Tottenham Hotspur (@SpursOfficial) May 30, 2019

“Liverpool are favourites, but with all the top-class players they have they can handle that,” Traore said.

“They play Tottenham many times, they know the opponent, and right now Tottenham fear Liverpool more than the opposite.

“If Liverpool play like they did since the beginning of the season, it will make the difference.”