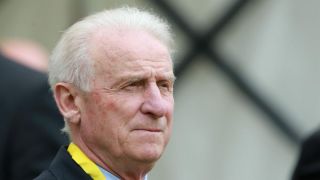 Giovanni Trapattoni and Raymond Domenech are two candidates among 59 applicants for the head coaching role with the Ivory Coast.

The Africa Cup of Nations champions are searching for a new boss after previous incumbent Herve Renard left to take over at Ligue 1 side Lille last month.

In an unusual step, the Ivorian Football Federation has released the list of names who have applied to replace Renard.

Among them is former Italy, Juventus, Inter and Bayern Munich coach Trapattoni. The 76-year-old, who last managed the Republic of Ireland, includes domestic titles in Italy, Germany and Portugal among his lengthy list of achievements.

Domenech is an ex-France coach, who oversaw a disastrous 2010 World Cup campaign in which the nation were eliminated in the group stages without winning game.

Other names on the list include Nigeria coach Stephen Keshi, Henryk Kasperczak - who has coached African sides Morocco, Mali and Senegal - and Englishman Dave Jones, who has been out of work since being sacked by Sheffield Wednesday in December 2013.