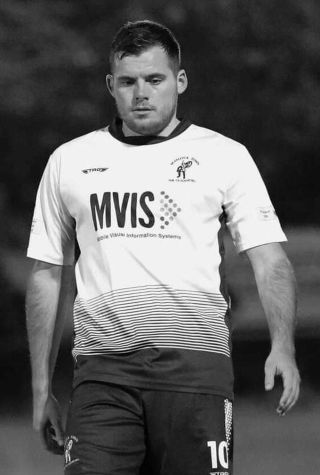 Non-league footballer Jordan Sinnott, who died on Saturday after being assaulted, has been described as “the best person” by his brother Tom, who has helped to honour his memory with the donation of football shirts.

Sinnott, who played for Matlock Town on loan from Alfreton Town, was found unconscious with a suspected fractured skull following a disturbance in Retford, Nottinghamshire, in the early hours of Saturday morning.

Clubs from all over England have since donated shirts with Sinnott’s name and the number 25 on, which will be on display at his funeral before they are donated to Sports Relief.

“I thought to myself and said to my mum and Kelly for his funeral I want the teams he played for hung up at the funeral because we want to remember everything good about him. Then from that the idea kind of snowballed.

“Kelly had a great idea to start a WhatsApp group with all of Jord’s mates in the community and they all pulled together.

“Within an hour the lads said they had secured all Premier League, Championship, League One and League Two and Scottish teams and non-league.

From everyone at @htafc The shirts are on their way @JordanShirts 🙏🏻 pic.twitter.com/56MqXwUovX— Mark Hudson (@M_Hudson5) January 28, 2020

“It is overwhelming and absolutely brilliant. We then said after the funeral we want them to all go to Sports Relief as a donation in Jord’s name so it can go to other children around the world.”

Sinnott is the son of former manager and ex-Bradford and Huddersfield player Lee Sinnott and started his career with the Terriers.

He went on to play for Altrincham, Halifax Town and Chesterfield before signing for Alfreton Town and later spending a period on loan with Matlock Town.

“There are not enough words to describe him really,” his brother Tom added.

“Out of everyone, he was the best person I ever knew. The funny thing with me and Jord is as brothers you would expect us to fight all the time, but we never had a fight, never raised voices to each other.

“I don’t think I ever heard him shout unless it was on the football pitch. There was so much love for the kid and his birthday is Valentine’s Day and that is quite apt really.”

After Sinnott’s funeral, the shirts with his name and the number 25 on will be donated to Sports Relief with the aim to allow children around the world to be able to own a football shirt.

Tom said: “Words can’t even describe it. It just means the world to me to know Jord, even after he passed, is still bringing joy to people even if he didn’t know them. It really does mean the world.”

Nottinghamshire Police detective inspector Justine Wilson, who is leading the investigation, has appealed to local people for information.

She said: “Retford is a fantastic town with a close-knit community, and I would like to appeal directly to that community to come forward. Jordan’s family deserves answers, so please come and talk to us.

“We are making progress in the investigation, but we have unanswered questions. I know there are people out there who saw what happened and can answer those questions for us, so I would like to appeal to you directly – please do the right thing, not just for us but for Jordan’s family.

“Anyone who has any information can call Nottinghamshire Police on 101 or contact Crimestoppers anonymously on 0800 555 111.

“We have also opened an online portal which the public can use to give us information. This can be done anonymously and is not traceable by the police.”