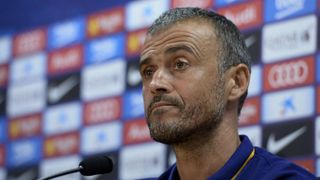 Barcelona coach Luis Enrique says Arda Turan will form an important part of his side, despite the Turkey international being ineligible until January.

The winger moved to Barca from La Liga rivals Atletico Madrid, but, as a result of the Spanish champions' ban on registering new players in 2015, will be forced to wait for his debut.

Turan's deal also includes a clause that enables Barca to sell him back to Atleti for 10 per cent less than the initial €34million fee, once a new president has been elected at Camp Nou on July 18.

But Luis Enrique has been impressed by the 28-year-old in recent seasons, telling reporters: "Arda Turan is a great player who knows La Liga very well.

"He's very fast and it's very difficult to steal the ball from him so he has everything we need in our attack philosophy.

"He has good criteria when passing and moving the ball but he's also good at defending so we understand he's a great addition that will make our squad more competitive. He's been a great signing for us."

Turan joins Aleix Vidal in making the move to Barca despite being unable to feature during the first half of the season.

"My responsibility as a manager was not only planning last season but also the beginning of this one," Luis Enrique added.

"We talked about players leaving and joining the club and I would like to congratulate the interim sport directors as Arda Turan is key for our team. We consider him a great incorporation as is Aleix Vidal.