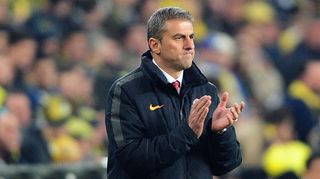 Galatasaray have taken an outright lead at the Turkish Super Lig summit after their 1-0 win over Konyaspor was followed by Besiktas only managing a 1-1 draw at home to Gaziantepspor on Sunday.

The Istanbul rivals had been neck-and-neck heading into the latest round of fixtures and Galatasaray appeared to be in danger of dropping points themselves for a while on Friday.

However, Selcuk Inan finally broke the deadlock six minutes from time to give Hamza Hamzaoglu's side all three points, a victory that led to the coach declaring adamantly that his side will clinch a record-breaking 20th Super Lig title this term.

And Besiktas failed to keep the pressure on their rivals, slumping to a stalemate against visitors Gaziantepspor two days later.

Jose Sosa's seventh-minute free-kick gave Slaven Bilic's side an early lead, but John Chibuike – who was ultimately sent off towards the end – levelled things just before the break, leaving Besiktas trailing Galatasaray by two points with four games left.

Fenerbahce are left sandwiched between the two and extended their unbeaten run to eight games in all competitions, but it was by no means a stroll as they left Sivasspor with a 3-2 win.

The match looked destined to end 2-2, only for Pierre Webo to net an 87th-minute winner to move Fener up to second and back into the UEFA Champions League spots.

The performance of the round came from Bursaspor, as Brazilian striker Fernandao scored four to inspire Saturday's 7-1 obliteration of Karabukspor, who remain four points adrift of safety.

Rock-bottom Balikesirspor suffered the cruel blow of conceding a 90th-minute winner to Istanbul Basaksehir in their 2-1 defeat, while Kayseri Erciyesspor did little to ease their relegation fears, drawing 2-2 with Mersin Idmanyurdu on Saturday.

Trabzonspor remain firmly in the hunt for the final Europa League place with Bursaspor and Basaksehir after inflicting a 2-0 defeat on Rizespor, while Genclerbirligi played out a goalless draw with Akhisar Belediyespor and Kasimpasa were downed 4-1 at Eskisehirpor on Friday.