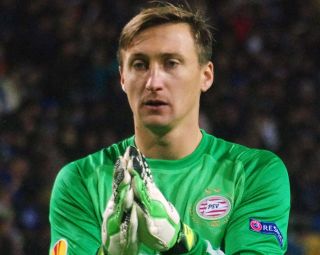 The goalkeeper suffered the injury in stoppage time of their league game with Roda JC as he kept out a late Marc Hocher free-kick, the Pole damaging his hip on the post and hitting his head on the metal rod at the bottom of the side netting.

The 26-year-old was knocked unconscious and received medical treatment on the pitch before being taken to hospital by the ambulance waiting at the side of the goal.

After tests on Sunday he was discharged with slight concussion and a bruised hip, and is in contention for their next league fixture against Zwolle on Saturday.

"He is doing very well now, and is already aiming for a possible Saturday evening return," a club spokesman told Perform.

"He is doing fine at the moment and will resume training tomorrow (Thursday)."

Tyton was making his fourth appearance of the season in Sunday's game, with regular number one Jeroen Zoet out with a groin injury.