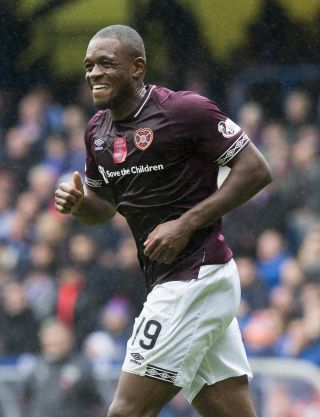 The striker created a goal out of nothing to cancel out Scott McDonald’s early opener and set Hearts on their way to a 2-1 victory at Tynecastle.

Ikpeazu, who missed more than four months of the season with a foot injury, later missed a penalty but Sean Clare had already scored from the spot before the break to send Hearts to Hampden to face Jambos record goalscorer John Robertson’s Inverness side in the last four.

However, the visitors had two strong penalty shouts rejected by Bobby Madden in the closing stages as Joe Cardle and Miles Storey both went down in the box with the first claim looking like a clear foul.

Hearts full-back Ben Garuccio saw an early free-kick saved but the visiting supporters were already making the most noise on a cold, wet and windy night in Edinburgh before McDonald sent them into raptures in the 17th minute.

Craig Slater did well to stand up a cross for Steven Saunders and McDonald was on hand to net the rebound from close range after Zdenek Zlamal parried the defender’s header.

Hearts’ low-key start continued until the 24th minute. Ikpeazu received the ball 22 yards out with little danger apparent to the Jags defence, but the powerful forward made space for himself and turned and fired low past Conor Hazard.

The hosts went ahead in the 35th minute following a terrible mix-up in the Thistle defence. Saunders left a long kick-out to his goalkeeper but was seemingly unaware of the threat of Jake Mulraney, who nipped in and was fouled by Hazard. Clare sent the goalkeeper the wrong way.

Hearts were well in control as the second half started but missed two great chances to wrap the game up.

Craig Wighton headed Marcus Godinho’s cross wide from eight yards and Ikpeazu saw a weak spot-kick saved after Madden ruled Blair Spittal had brought him down, as the midfielder claimed he had used his shoulder fairly.

Thistle were lifted by their let-off and Zlamal had to look smart to foil Cardle before McDonald fired just wide from 20 yards after a quick counter-attack.

Hearts regained control but the Jags threw men forward in the closing stages and they had a very strong penalty claim rejected as the game moved into stoppage-time when John Souttar lunged in and appeared to bring Cardle down.

Madden waved play on before being surrounded by Thistle players and the referee was unmoved moments later as Storey went down again as he chased a ball forward amid further appeals.