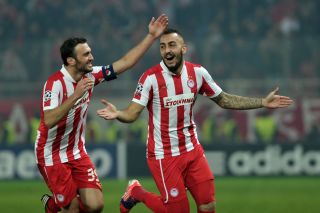 The Greek international gave his side a first-half lead from close range before Aleksandar Mitrovic missed from the penalty spot as Anderlecht spurned a golden opportunity to draw level.

Despite the hosts creating a number of chances, Mitroglou struck again and then put the seal on a fantastic result with a stunning long-range effort that secured the Greek champions their first win in Group C.

Anderlecht handed a start to teenage midfielder Youri Tielemans, who at the age of 16 years and 148 days became the third-youngest player to feature in the Champions League.

Olympiacos striker Javier Saviola, who scored last time he visited this ground in a 3-0 win for Malaga, made his 96th Champions League appearance, while David Fuser (hamstring) and Paulo Machado (knee) failed to recover from injury.

Anderlecht came into this game having not lost to Greek opposition in seven competitive fixtures. And they made early inroads during the opening exchanges, with Mitrovic forcing Dimitris Siovas into a well-timed last-ditch tackle after an impressive run through the centre of the defence.

The hosts continued their bright start and should have been ahead after 12 minutes when Dennis Praet poked an effort wide of the post before  Massimo Bruno smashed a volley into the side netting a just a couple of minutes later.

Anderlecht were soon made to pay for their wastefulness after the quarter-hour mark when Vladimir Weiss cut inside from the right before laying off  to Saviola, who threaded a delicate ball into Kostas Mitroglou to finish from close range.

Mitroglou's goal failed to deter the hosts, who nearly responded straight away as Bruno forced Roberto into a smart save from long range.

And they were given the perfect opportunity to draw level after 25 minutes, when Sacha Kljestan was brought down in the box by Andreas Samaris, but Mitrovic’s tame spot-kick was kept out well by Roberto.

Anderlecht continued to probe, with Tielemans’ dipping free-kick saved comfortably before Praet fired over just after the half-hour mark.

Tielemans had another set-piece parried away by Roberto just after the break, with Guillaume Gillet failing to take advantage of the resulting rebound.

For all their pressing, the home side continued to look vulnerable to the counter-attack, with Weiss looking particularly lively.

A blocked shot from the former Rangers playmaker eventually found its way to Mitroglou, who could not keep his shot down from a tight angle.

Mitrovic should have levelled with two chances in as many minutes just a few moments later before Mitroglou popped up once again to double the visitors' advantage.

The Greek international did well to get on the end of a perfectly-floated ball over the top from Delvin N'Dinga before rifling a half-volley past Thomas Kaminski.

A resolute Olympiacos defence began to frustrate the hosts and their misery was compounded 20 minutes from time when Mitroglou picked up the ball on the edge of the area to curl home.

Matias Suarez should have done better to keep his shot down late on, wasting yet another chance on what was ultimately a frustrating night for the home side.