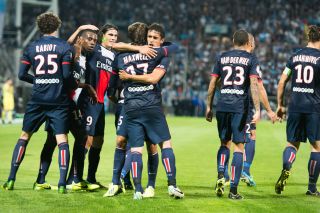 The Ligue 1 champions will travel to Brussels for Wednesday's clash in buoyant mood, having not tasted defeat over 90 minutes in Europe's premier club competition for more than a year.

PSG were knocked out of last year's Champions League by Barcelona at the quarter-final stage, but exited on away goals after both legs were drawn.

Laurent Blanc's side have made a superb start to their current Champions League campaign, with wins over Olympiacos and Anderlecht putting them top of Group C.

Thiago Motta – who has completed more passes than anyone else in this season's group stage – scored a double in the 4-1 win in Greece.

Zlatan Ibrahimovic was then on target twice in a 3-0 success against Benfica earlier this month as PSG continued to impress.

PSG are considered to be among the favourites to win the competition, with their strike force of Ibrahimovic, Edinson Cavani and Ezequiel Lavezzi likely to pose problems for any defence.

They have scored in each of their last 28 matches, the last time they were held coinciding with their last defeat in regulation time.

PSG did bow out of the French Cup at the quarter-final stage in April, but that came as a result of a penalty shootout loss to Evian TG.

Brazilian Marquinhos has scored in both of PSG's Champions League outings this season and will be hoping to continue his good form, while midfielders Motta and Marco Verrati are available again following suspensions.

However, PSG will be without defender Thiago Silva, who is still struggling with a hamstring injury, Javier Pastore and Christophe Jallet.

In stark contrast to PSG's run in the Champions League, Anderlecht have won just two of their last 10 matches in the competition.

They have also lost both of their Group C fixtures this season, following up a 2-0 reverse at Benfica with a particularly disappointing 3-0 home defeat against Olympiacos.

Qualification for the round of 16 already appears a tough ask for the Belgian side, who have made their worst start to a league season in 15 years.

They did win on Friday, however, with Chancel Mbemba's first goal for the club aiding a 2-0 victory over Mons that left Anderlecht fifth in the Pro League.

Young midfielder Youri Tielemans played a full 90 minutes against Mons and is set to feature again when PSG visit.

Tielemans became the third-youngest player to feature in the Champions League when, at the age of 16 years and 148 days, he started against Olympiacos.

Silvio Proto (ankle) is likely to miss out for Anderlecht, while Ronald Vargas (knee) is not expected to recover from surgery until next month.