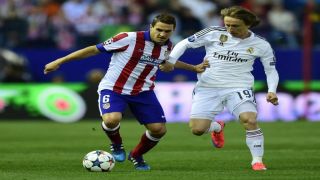 In a repeat of last season's final, Real dominated for much of Tuesday's clash at the Vicente Calderon.

But in Oblak, they ran into a keeper in inspired form, with his superb fourth-minute save to deny Gareth Bale, through on goal, setting the tone for a tense evening in the Spanish capital.

The Slovenia international was particularly impressive in the first half as Real spent much of the opening 45 minutes on the front foot.

Atletico came back into the contest after the break, but neither side could find the elusive breakthrough, meaning an intriguing second leg lies in wait at the Santiago Bernabeu next Wednesday.

After failing to beat Atletico in six attempts so far this season, Real Madrid defender Alvaro Arbeloa said in the build-up that his side had figured out how to beat their city rivals.

And that looked to be the case in the early stages, with Oblak denying Bale in a one-on-one situation as Real flew out of the blocks.

Diego Godin failed to deal with a long ball and it sent Bale through, but the Welshman opened his body up and showed his intentions, with Oblak keeping out his curling strike with his right arm.

Oblak reacted well to Cristiano Ronaldo's fizzing free-kick in the ninth minute, and after a lull in chances, he did similar to deny Bale from distance.

The Atletico keeper then kept out two good James Rodriguez efforts before the break - the first a splendid strike from the outside of his left foot - while the hosts' only meaningful chance of the first half saw the in-form Antoine Griezmann shoot at Iker Casillas from the edge of the penalty area.

Arda Turan nodded wide once play resumed, while Sergio Ramos caught Atletico forward Mario Mandzukic - back in the side after recovering from an ankle injury - in the face with a stray elbow.

That saw the bloodied Croatia forward leave the pitch, and he was involved in another tangle with Dani Carvajal shortly after.

Toni Kroos was next to try his luck from distance in the 57th minute, but once again Oblak showed clean handling to an awkward strike that bounced just in front of him.

Mandzukic's tense second half continued when he elbowed Carvajal, perhaps in retaliation, before Atletico enjoyed their best spell in the latter stages.

Godin flicked over from close range before Atletico's Mario Suarez and Real's Marcelo were booked - with both cautions ruling the respective players out of the second leg.

The hosts mounted one last charge, as Turan saw his effort smothered by Casillas and Arbeloa blocked a Mandzukic strike but the two sides were forced to share the spoils - largely due to Oblak's brilliance.